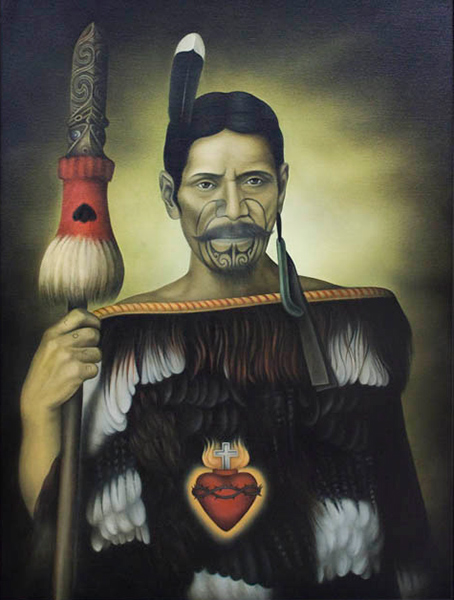 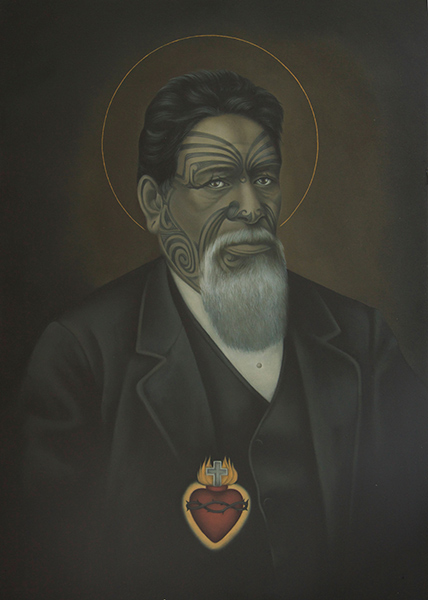 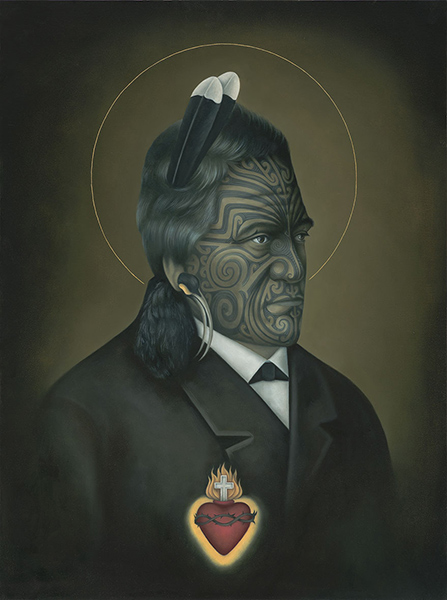 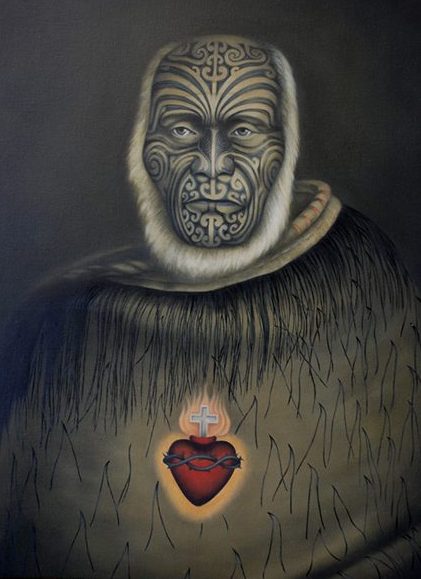 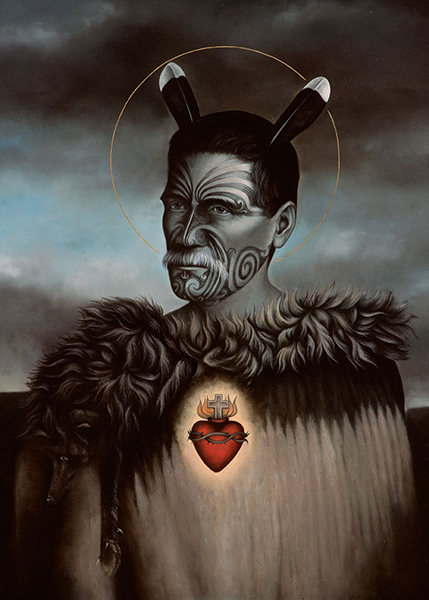 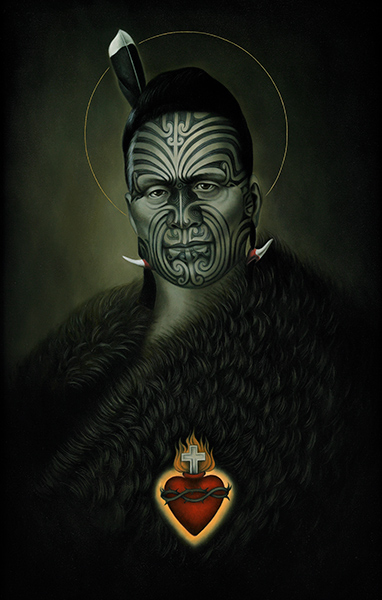 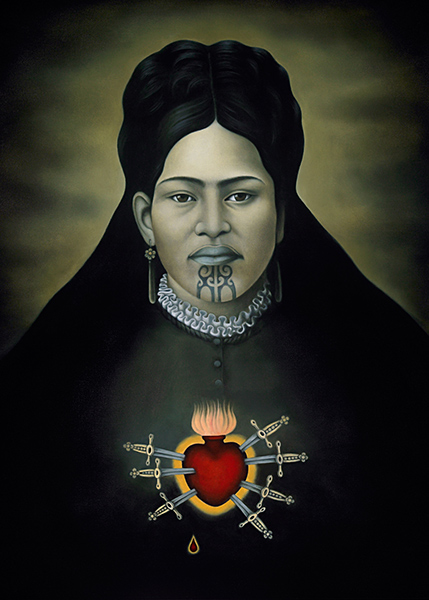 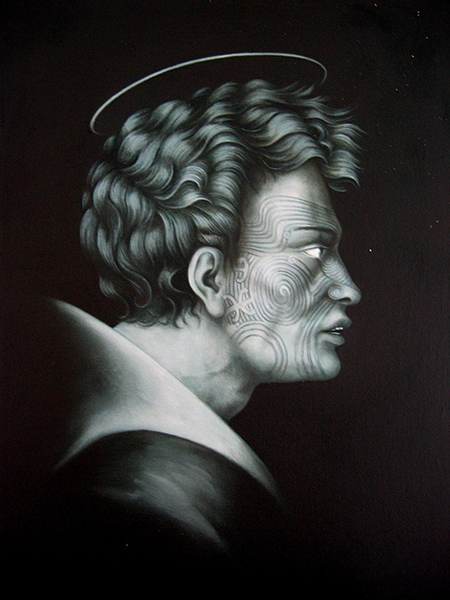 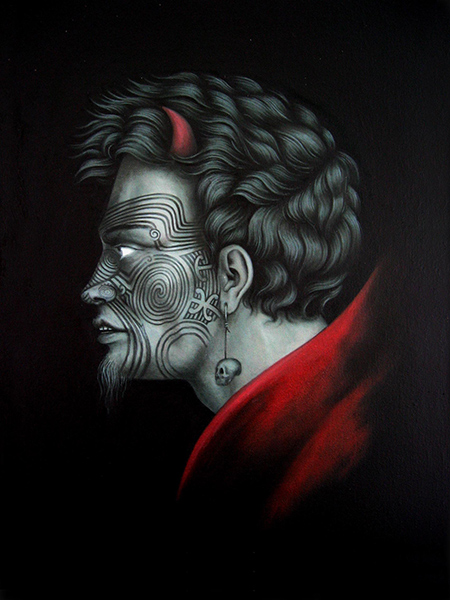 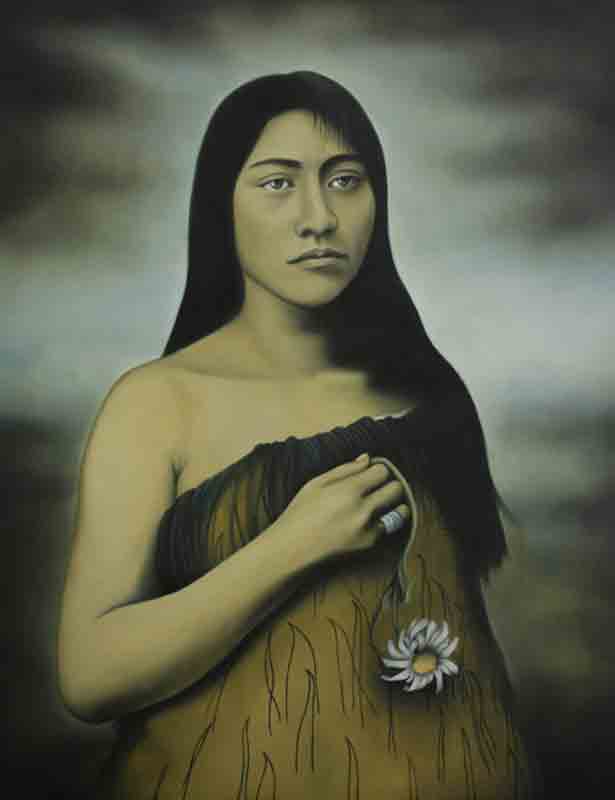 The great Ngati Maniapoto chief, Rewi Maniapoto, was painted by Gottfried Lindauer in 1882. Come the new millennium, Heather Straka re-works the painting. The huia feathers of the rangatira have their white tips within and without the gold rim of a clear halo. His prized kuri skin cloak is topped now with a fox; while a flaming heart burns at the centre of his being – a devotional image that is both Catholic and high camp.

Straka’s painting is titled Jesus in Furs. But is she really painting the unthinkable? Afterall, Maniapoto was a terrific and fearless leader of men. And like many of his peers, he was in his lifetime greatly influenced by missionary teaching – while working keenly and strategically between the King movement, North Island iwi, and the various governments of his day. In other words, Maniapoto was hybrid in attitude and dress. Here he is rendered sensitively and with dignity – Straka’s careful painting begging the question, just who is saintly and who is to be feared here? Or, at the behest of the exhibition title, whose paradise has been lost, and what has been the gain?

In the adjacent room, Straka’s Saint presents a slightly different picture. From art’s image dictionary comes the cool neo-classical sensuality of Canova, mixed with the ecstasy of Bernini. Is this saintly delirium or simply masochistic high camp? Straka’s tonal control, her rendering, is that of a believer. I think this grisaille Saint is both.

Straka’s blend of Europe and indigineity is cheeky, brazen and knowing. She sees a similar mix of cross-cultural influences layering our society today. She has not sought permission from Waikato to make these paintings – believing that once in the public domain, imagery is appropriable. For her, the power of art to be provocative, to ask questions, is an important prerogative. With elegance and care, Heather Straka in Paradise Lost is very deliberately referencing contemporary society by acknowledging aspects of our past.