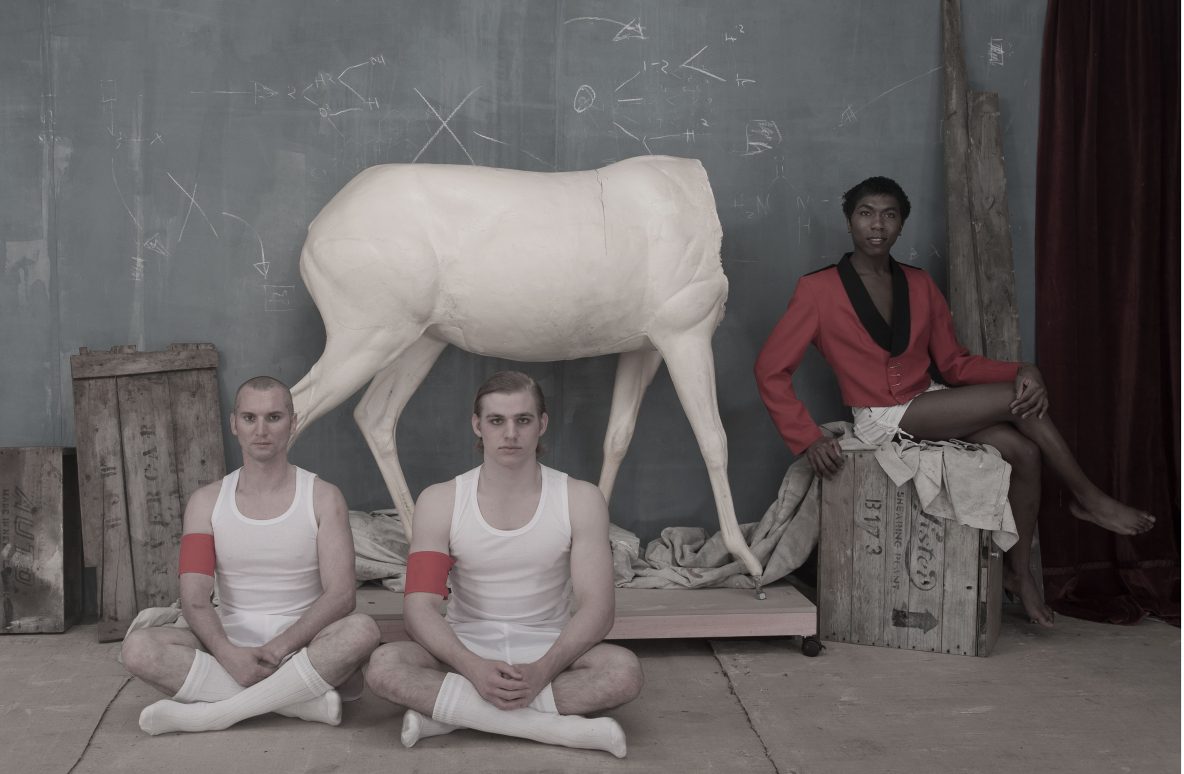 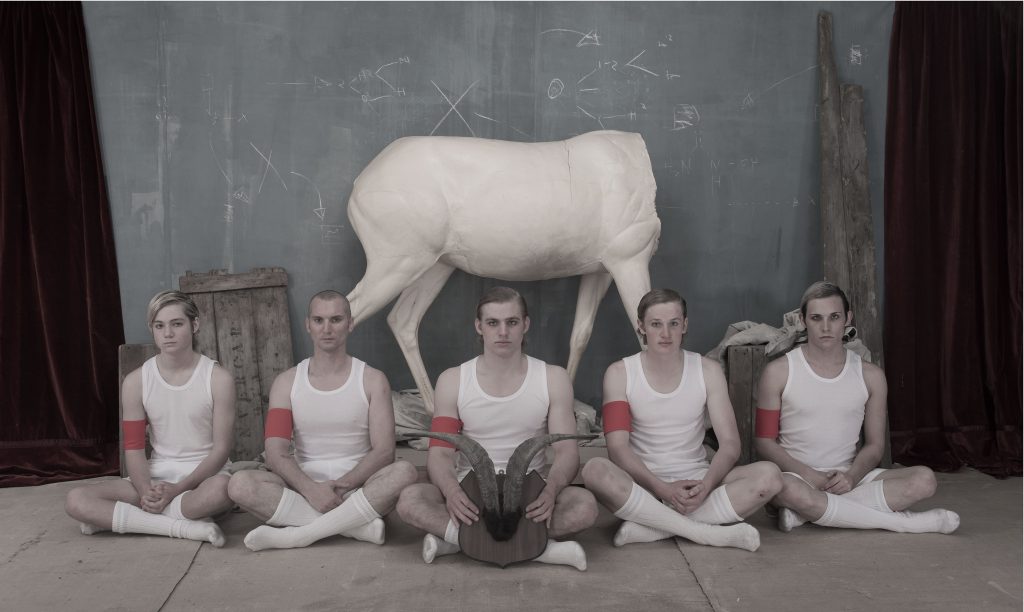 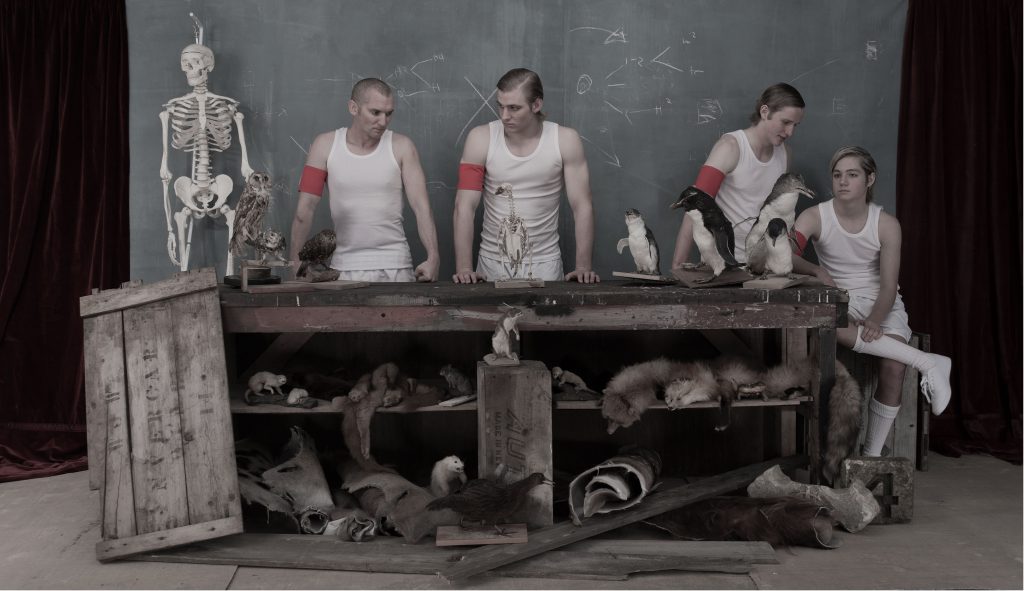 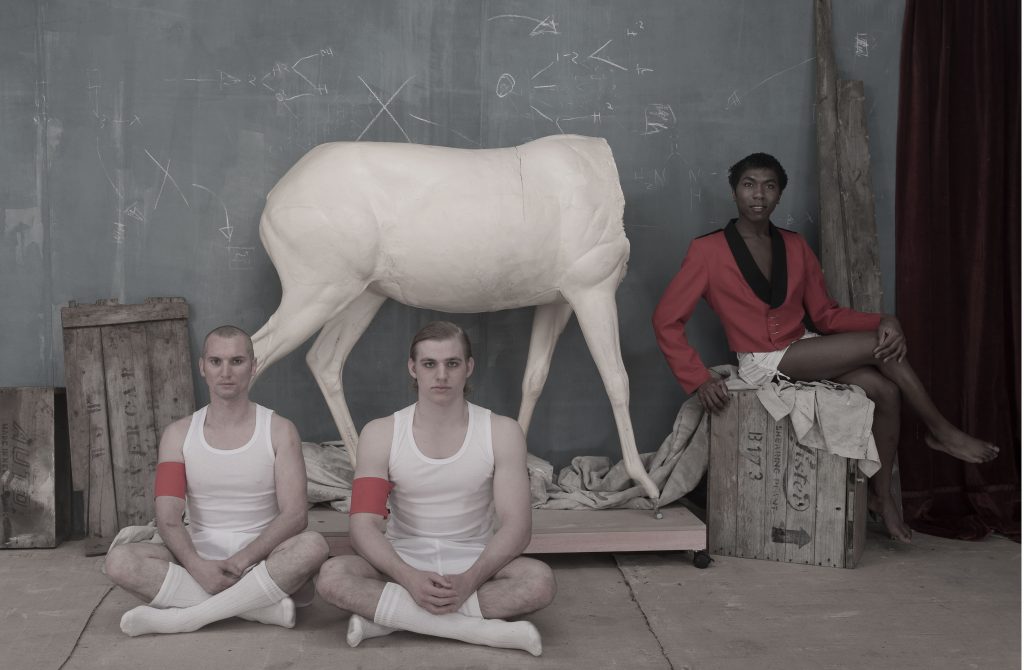 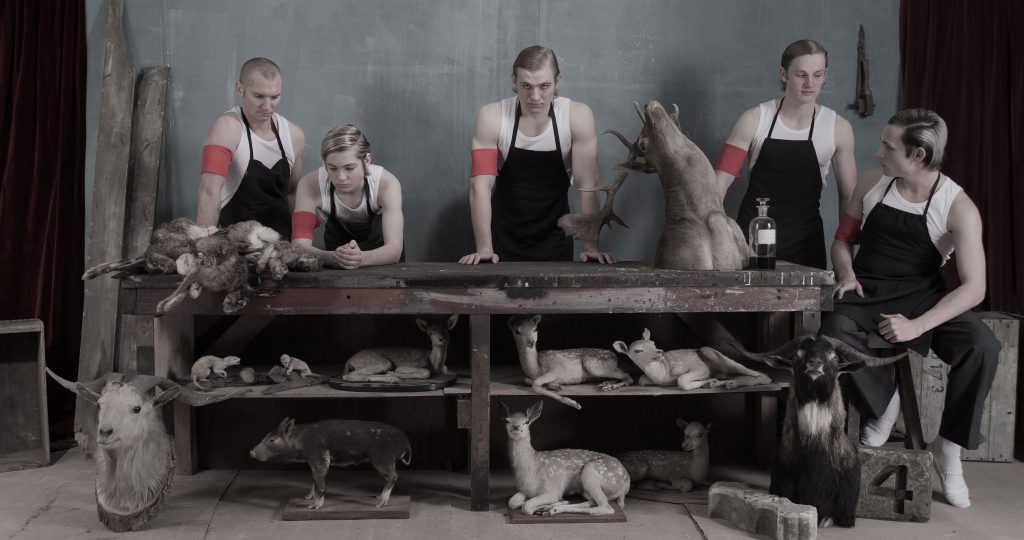 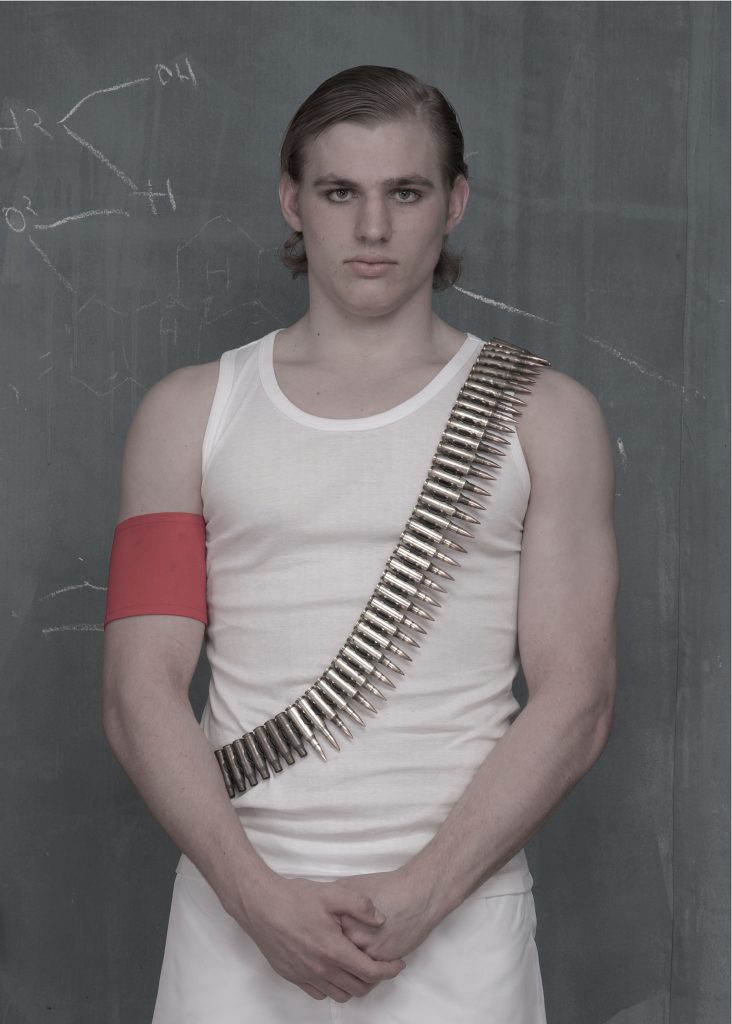 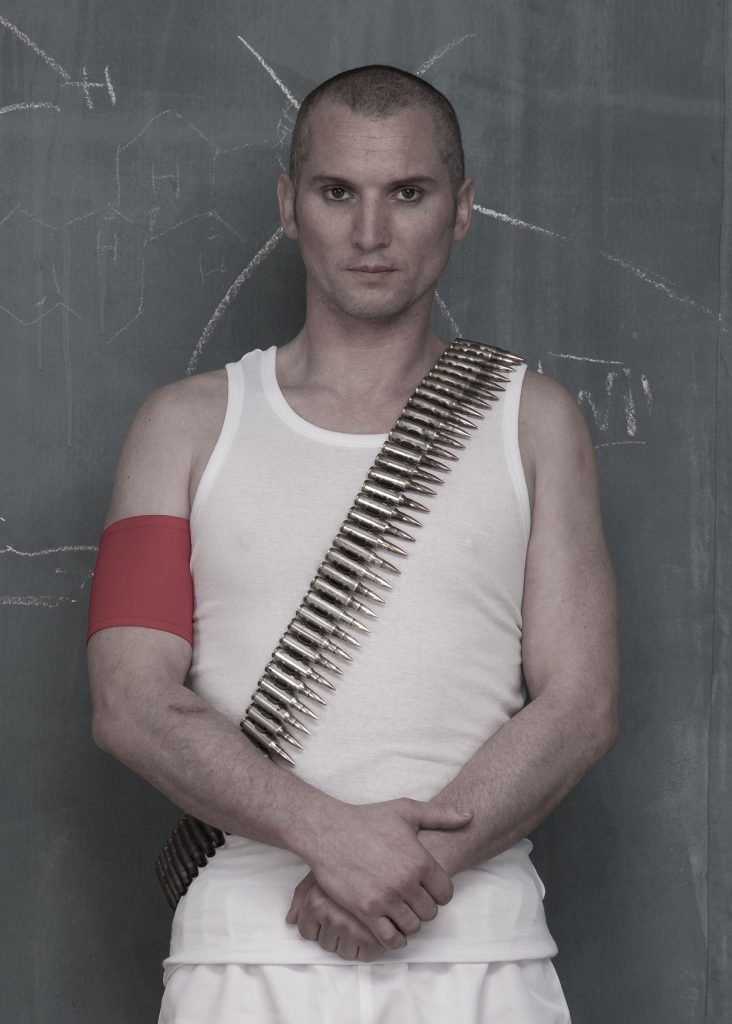 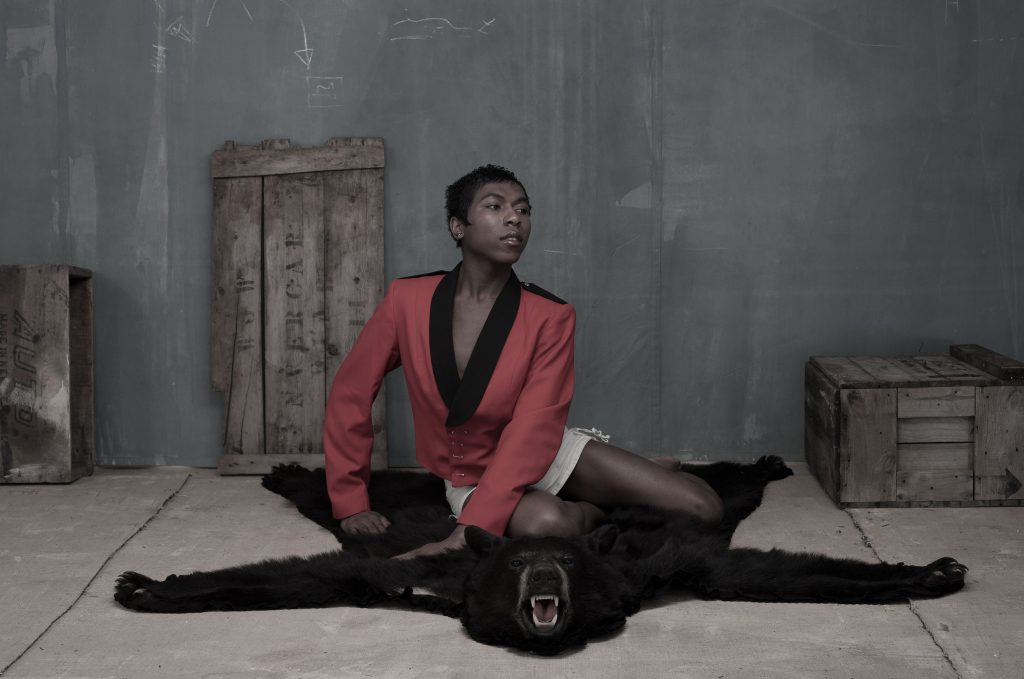 Blood Lust is the title Heather Straka has given to a series of photographs she made in the first half of 2012, during her residency as William Hodges Fellow in Invercargill…

Take six male models (from a local rugby team and gym) and a stylist – for consistency of hair, make-up and dress. Gather many carefully chosen props. And assemble in the photography suite at the Southland Institute of Technology. The artist here is literally director – a role she has played in the past, where she has photographed first, and then gone on to make a series of closely related paintings later.

But back to Bloodlust – just what have we got here? A tableau – a meticulous horizontally arranged menagerie of male flesh and dead animals. All grouped in and around a big bench – a shallow space full of detail, with chalkboard and a series of formula like thoughtforms just behind. Dark red drapes curtain some edges like a stage, as in Teamwork (below). Aspects of the composition are like a Last Supper, except that here there are more stuffed animals and guns. Then we learn that the chemical equations behind include the molecular drawings for testosterone. I look at the young men, consider the artist’s titling, and begin to wonder.

Consider this notion of bloodlust I tell myself – along with that of the southern man – for these photographs reflect Heather Straka’s time in Southland after all. She has obviously enjoyed the local dead rooms, being surrounded by the spoils of a successful hunt and the presence of many a glorious trophy.  But quite what is she dressing up? Why this desire for masquerade? Does the southern man enjoy a little masquerade, a little cross-dressing, a little gender-bending perhaps? For you’d have to say that Heather Straka might do.

There has always been in her work a love of surface, an almost fetishist obsession for the look and appearance, for the dressing up of things, which goes a long way back. Straka’s palette here is rich and elegant – based around creams, greys and reds – but it is at the same time utterly restrained. And the young men are quite Aryan looking with their blonde hair, their comb-overs and their immaculate whites.

So the heartbeat of the hunter pulses right through this beautifully dressed group. Witness however the work entitled Died of Natural Causes, the effete figure in red jacket delightfully splayed atop a skinned bear. S/he is provocatively androgynous at best – another recurrent theme in Straka’s work that harks back to the very first painted collars of the late 80’s. And if you’ve had the pleasure of meeting the artist, as many in Southland have, it is interesting just how she physically presents.

It is also the protocols of taxidermy that is pricking Straka’s interest here – the accepted practices around what is appropriate in terms of an animal’s overall form, pose and relationship to props. The continuum from naturalism to realism provides the platform for this debate – but it is also a revealing framework from which to view the whole of Straka’s practice. Suffice to say that as an artist, Heather is much more an aroused naturalist than a realist. That is, she is someone who enjoys suggestion, who relishes the play of ideas around form, more than she enjoys the execution or meticulous reproduction of form itself.

This relish of foreplay, or in this case the preparation for and excitement of the hunt itself, might matter more than the end result – a magnificently mounted trophy. It is the attitude one brings to bear in telling the story that really counts. Still, Straka’s big picture is always told through lavish attention to composition, and to the detail of colour and surface. She is the author of alluring and splendid pictures. It is just that in these pictures, she manages roles of both hunter and the hunted herself. And that is where Straka as naturalist, as conjuror of suggestion really comes to the fore. She has come out to play.